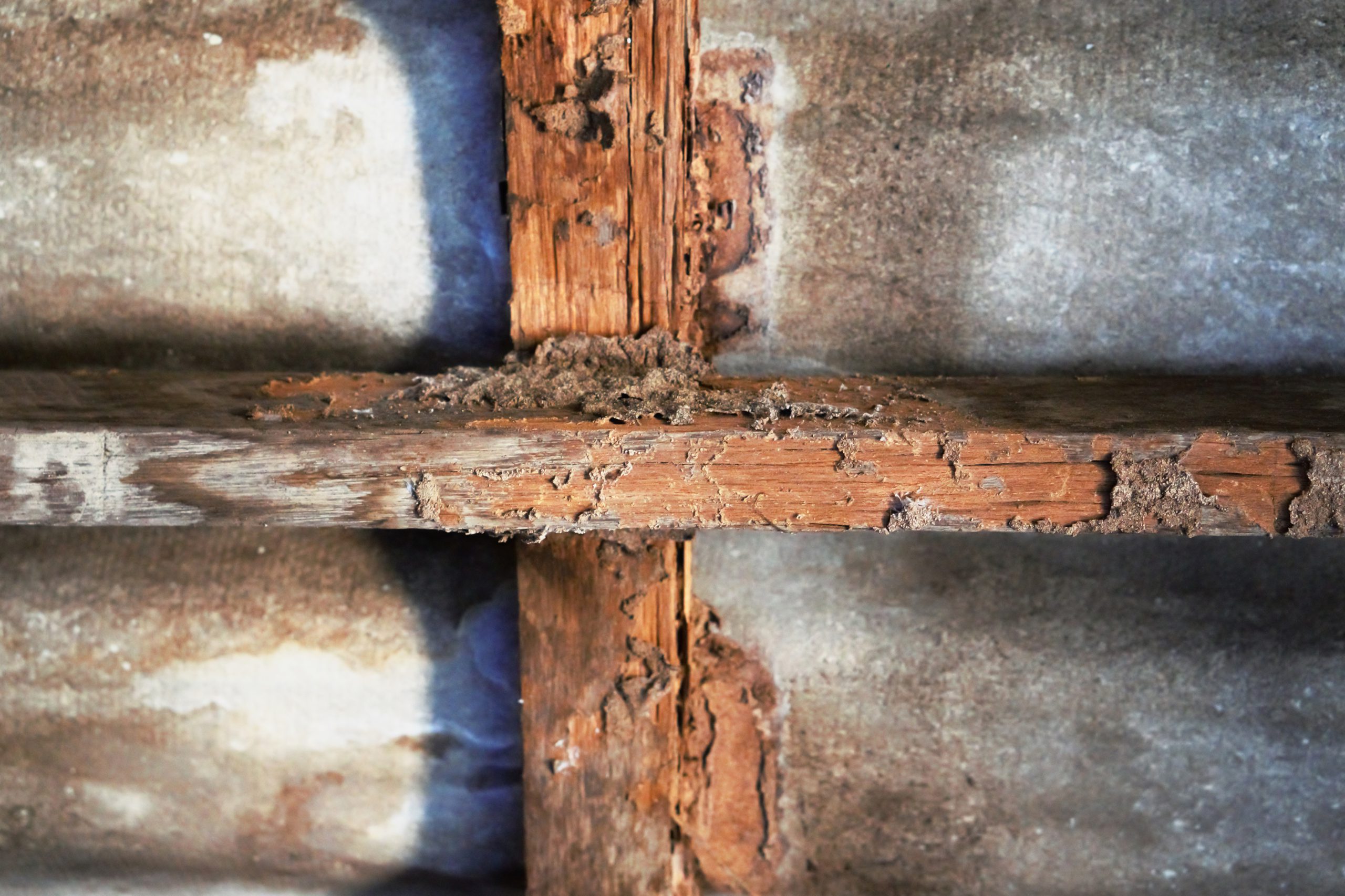 Common Furniture Beetles larvae live in timber and use it as a food source. As a result they bore lots of narrow tunnels and chambers in timber where they grow large enough to turn into beetles, mate and lay eggs within the network of newly created tunnels. Then they eat their way out of the infested timber in search for a new food source.

Identifying woodworm depends on the type of wood and the species of wood boring beetle responsible as the tell-tale signs of infestation can differ. The most clear indication of woodworm, however, is the tiny holes they leave in the wood once the mature adults fly away in search of new timber.

There could also be powdery or pellet shaped wood around the area, known as waste or “frass” which is left by the larvae. Woodworm season is May to October so you may also be able to spot adult wood boring beetles emerging from the infected wood during the summer months. The main predator of the Common Furniture Beetle is the Steely Blue beetle, so if you see an influx of this beetle you know they’ve found a good food source nearby.

where can you find woodworm?

Woodworm, true to their name can be found in all types of wood, such as:

However, woodworm are a living organism so they require food, oxygen and water in order to survive. In most maintained houses the wood boring beetles will find plenty of food and oxygen, but water is often scarce. The beetle’s larvae’s predominant food source is starch found in the tree’s own food store. This starch is only found in the sapwood, or outer part of the tree and most structural timber is taken from a tree’s core. This means there is generally not enough food for woodworm to live in structural timbers. However, timber that is prone to woodworm infestation is usually found in modern builds where there is a higher proportion of sapwood. Older buildings will have also been subject to rising damp or penetrating damp which allows for more optimal conditions for woodworm to thrive.

How do i get woodworm?

The Common Furniture beetle is similar to all wood boring beetles in that it likes damp wood that is easier to chew through. It can be found in both softwoods like pine, spruce and cedar, as well as hardwoods like ash, mahogany and oak. Woodworm tend to prefer damp wood of 28%, or above, moisture content as it gives their larvae the most optimum environment to develop into adult beetles.

Woodworm prefer the wetter sapwood of a tree and are unlikely to seek out the inner heartwood of timbers due to a lack of nutrients. If your furniture, floorboards, joist, etc. are made of quality heartwood then there is less risk than if the timbers in your home are of lower quality wood.

Not dealing with damp wood or allowing damp to become an issue in your home will increase the risk of a woodworm infestation. Insufficient insulation in your home can also lead to damp timbers through condensation which will eventually lead to timber decay and encourage female furniture beetles to lay their larvae in the affected areas.

Untreated, older wood is also something that attracts woodworm so it is best to inspect any older furniture or firewood that you bring into your home. Always maintain older furniture with protective varnish and store firewood outside of your home.

To correctly identify a potential woodworm issue it is wise to fully understand the lifecycle of the Common Furniture beetle. As we’ve learned, woodworm are actually, more often than not, the larvae of a wood boring beetle – the Common Furniture beetle. This means that the majority of the damage to wood is caused by the juvenile beetles happily eating away on the inside of timbers away from prying eyes.

Woodworm have a life cycle between 2 to 5 years in which the larvae will have hatched, eaten enough to emerge as beetles, mated, laid more eggs and then died.  Only part of this lifecycle is evident to the human eye, so knowing this cycle will help to diagnose a problem.

Untreated, older wood is also something that attracts woodworm so it is best to inspect any older furniture or firewood that you bring into your home. Always maintain older furniture with protective varnish and store firewood outside of your home.

The female woodworm enters the timber through natural cracks, crevices or previous woodworm holes in the surface. In which, she will lay her eggs where they will be protected.

A few weeks later the eggs will hatch into larvae where it will begin its life of eating and weakening the wood for up to 5 years. At this stage you may be able to see the waste product of this larvae, called “frass” underneath any infected wood.

Once the larvae has consumed enough of the nutrients in the wood it will make its way to the surface and create a pupal chamber. This is where it develops into an adult beetle and bore its way out of the surface. This is the only stage where we can identify the presence of woodworm – unfortunately after the damage has been done.

Woodworm infestation and its effects

The infected timber is susceptible to more and more chambers and holes opening up as the lifecycle of the inhabiting beetle continues. This not only destroys the aesthetic appearance of the affected timber it can also weaken structural timbers to the point of replacement. It is possible for infected wood to completely fail and result in collapse which can be very costly to repair.

Although the Common Furniture beetle is the most likely culprit when it comes to an infestation there are actually many different types of woodworm that could be responsible for timber damage. For this reason, it is best to firstly identify which beetle is the cause of the infestation before any treatment can be administered. If you’re not sure which type of woodworm you are dealing with then it is always wise to seek the services of a professional.

The most widely remedy for the Common Furniture beetle is to spray the infected area which will exterminate the insects on the surface and break the cycle. However, it might be best to diagnose the underlying issue that allowed the timbers to become infected with woodworm. This means looking at what woodworm need to thrive which includes water, so we would recommend a damp survey together with woodworm treatment. Rising damp, penetrating damp and condensation could all contribute to a higher moisture content environment which woodworm seek out.

If you’re unsure if you have a woodworm infestation, or if you’d like an honest and professional diagnosis of any timber decay or damp issues, we’re always on hand to help.

Fill in the form below and one of our team will get back to you.

Or give us a call on

We’re Ready To Help You

Please get in touch with our friendly team today and we can get the ball rolling on your project sooner than you think.